It’s better to be safe than sorry with college drinking

It’s unfortunate that college drinking has gotten so out of control. College drinking is certainly not just the fun that’s advertised. Parties, beer pong, keggers, pub crawls, body shots, chugging, and binging. While advertised as liberating and fun, the culture of college life is a culture of excessive drinking, impulsive acts, and too often, violent behaviors.

A Rite A Passage With Negative Consequences

For many college students, drinking is a rite of passage that comes with being away from home and establishing an independent lifestyle. College life is also a time of increased socialization, friendships, and dating, and alcohol use may be used as “liquid courage.” There is much unstructured time in college which can also lead to more partying. This includes underage drinking as it is easy to get older students to buy for you, drinking as a young adult, and often times, fraternity and sorority parties.

Binge drinking and over-drinking leads to impulsive actions and poor decision making. It can also lead to violence including sexual assault – for either the victim or perpetrator(s). And all too frequently, we also hear about fraternity hazing behaviors which are also often about extreme drinking and sometimes, physical assault.

One overlooked component of teen high school and college drinking is that women process alcohol at twice the rate of men, which means 1 drink for a teen girl is like two for a boy, and 2 drinks for a girl is like 4 for a boy. That puts girls at risk for negative consequences at twice the rate of boys. The ROR poster should be in every college dorm. 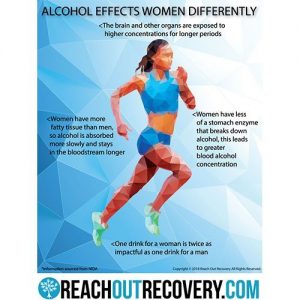 College Drinking Is A Health Problem

Regarding statistics about college drinking, The National Institute on Alcohol Abuse and Alcoholism, relates that this drinking is a significant health problem. They relate two studies which revealed that almost 60% of college students (18-22) drank alcohol in the past month and that “almost 2 out of 3 of them engaged in binge drinking during that same time frame.” They also note the issues of drinking and violence. Unfortunately, studies also indicate that colleges with strong Greek presences and/or or have top-flight athletic programs are more likely to have a problematic system of partying. Other statistics include:

Likewise, The Maryland Collaborative notes that:

Violence can come about due to arguments over anything big and small. Groups of students getting into fights; damages to property; fraternity hazing including forced drinking;  violence including sexual assault; and targeting of other students including racial minorities and LGBTQ students. This violence can also be sexual assault or date rape – mostly male upon female, but also males upon other males such as rape by using some type of penetrating object. Sexual assault includes anything from unwanted kissing to rape.

Educate Your Teens About College Drinking

It is imperative to educate college-bound students about the detrimental effects of extreme alcohol use. Parents must be open and honest and willing to listen to their kids. They also need to set boundaries such as withholding money for school if there are poor grades, legal charges, binge drinking episodes, or other issues related to drinking. They may require the child to participate in college education groups about drinking and/or counseling sessions through the school’s health and mental health treatment activities. Also, colleges may also enforce some type of education or treatment regarding alcohol use. So prevention is the most pertinent way of stopping alcohol use problems and violence. Read and understand ways to focus on such prevention for your college-bound teen.

Read this if you want to stop drinking!

Carol Anderson, D.Min., ACSW, LMSW, is a licensed clinical social worker with over 25 years of experience in the fields of mental health, addictions, and co-occurring disorders. Her other specialties include grief and trauma, women’s issues, chronic pain management, holistic healing, GLBTQ concerns, and spirituality and transpersonal psychology. Dr. Anderson has been educated and trained in the fields of education, social work, and spirituality, and she holds a Doctor of Ministry degree (non-denominational/interfaith) specializing in spirituality.