by William White 4 years ago2 years ago
1169views

I regularly receive emails and phone calls that poignantly illuminate the stigma and discrimination people can face as they make the journey through addiction to recovery and a life of purpose and meaning. Drug warrior ideologues have employed manipulative rhetoric and caricatured images of people experiencing alcohol and other drug (AOD) problems for political, professional, and financial gain. The resulting policy and practice consequences have inflicted harm in multiple quarters, but perhaps most devastatingly upon those most directly affected by such problems. Misconceptions about the nature of addiction and pessimism about the potential for long-term recovery have fueled social stigma, led to the mass incarceration of drug users, and assured inadequate resource allocations for addiction treatment. Stigma has also inhibited help-seeking and created obstacles to recovery in such areas as housing, education, health care, and employment, as well as contributing to the social isolation of people in recovery. For people in recovery, addiction-related stigma can insert itself into all manner of restrictions years into the recovery process. Below is an illustration of such a restriction when Shiv Sharma, a member of the Board of SMART Recovery International (SRI), requested a visa to travel to the SRI board annual meeting in the U.S. (His letter to me is shared here with his permission.)

Thanks for taking an interest in my situation. It is much appreciated. I provide below some background and details on my recent situation.

I was born and grew up in London, the son of first generation immigrants from India. Despite growing up in government housing, I did well at school and managed to go to university where I graduated with a degree in Pharmacy. I went on to train and worked in community pharmacy for ten years. Unfortunately, ever since I was a teenager, I had started using recreational drugs, initially cannabis. However, in my 20’s I developed problems with illicit heroin and crack cocaine. By the time I reached my 30’s I was not fit enough to work and left regular employment. I also had co-existing mental health problems. During the time I was using I was arrested on a number of occasions for possession of controlled drugs. Although I was never given a custodial (prison) sentence, I was sentenced to a number of community-based, court-ordered rehabilitation programs. My last conviction was in 2011. 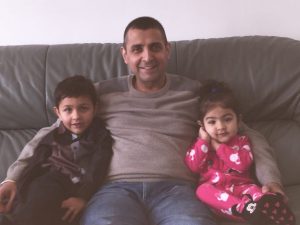 I got married that year and for the first time I really engaged in my treatment. Initially I was put on OST (Opioid Substitution Treatment) in which I was prescribed methadone. However, I only took this for about 6 months and detoxed myself completely from opioids and all illicit drugs. I have been abstinent since 2013 and was introduced to SMART Recovery at that time. I initially attended meetings as a participant but after about 4/5 months I trained as a facilitator and started running meetings. In parallel with this I started to volunteer at my local Addiction Recovery Centre to support other people experiencing substance abuse problems. I like to think that my lived experience and visible recovery has helped and inspired other people trying to overcome addictive disorders.

About 4 years ago I entered paid employment in the field of addictions. Initially I was a Recovery Practitioner and after a few years I was promoted to Team Leader for the Young People’s aspect of the service. Earlier this year I moved into a new role as the Team Manager responsible for Criminal Justice, Young People and Outreach. I work closely with the police, courts, probation (parole) and all aspects of the criminal justice system to ensure that offenders with “trigger offences” are drug tested on arrest and those identified with substance misuse issues are engaged into evidence-based treatment interventions either in the community or in prison depending on the severity of their offence and the decision of the court.

As mentioned previously, I have been actively involved with SMART Recovery for 5 years. Initially I was a participant, then a facilitator, and I also promoted the program regionally in Greater London at Public Health England events (the government body which oversees the NHS). In 2016 I was appointed as a peer member to the Board of Trustees for UK SMART Recovery and have been involved in the strategic planning and direction of the organisation. At the end of last year I also joined the Board of SMART Recovery International (SRI) which is a new international entity with the aim of overseeing global growth of the SMART Recovery program.

In my personal life I have been fortunate enough to be blessed with 2 beautiful children. I have a three year old boy (who has just started kindergarten!) and a 1 year old baby girl. I have really fought hard for my recovery and endeavour to be a good family man, citizen and contributing member of society.

In September of this year, SRI held a strategic planning session in Arizona in conjunction with the annual US SMART Recovery conference. I made arrangements to attend and booked a visa appointment with the US embassy in London. Despite being totally transparent about my history and it being over 7 years since my last drug possession offence I was denied a visa. At my interview, the officer did commend me on my recovery but said that they were unable to grant a visa because my crimes were “of moral terpitude”. I am more than happy to send you a copy of my ACPO certificate which lists my convictions. They are all low level drug-related and are considered “spent” under the UK Rehabilitation of Offenders Act. In my job role I have undergone enhanced criminal record checks and have been cleared to work with vulnerable adults and young people and I have access to secure settings such as police custody suites and prisons.

I find it hard to understand why the US embassy did not take all of this into account when coming to a decision. The purpose of my visit was to contribute to the important work of our Recovery organisation. I felt excluded and judged on the basis of my previous addiction problems which I have now overcome. This also illustrates how what is fundamentally a health issue has been mixed in with the criminal justice system for too long now. People do recover and change. I and many others am living proof of that and to be burdened with the stigma of past actions is something we have to overcome.

I admire your advocacy work Bill and do let me know if you’d like to know anything else.

The “moral turpitude” brand on people recovering from substance use disorders is a destructive anachronism that should be now and forever abandoned. If we want people who have experienced AOD problems to resolve such problems and contribute as productive citizens, then communities must remove obstacles to personal and family recovery, provide visible pathways of entrance into recovery, and create environments that enhance quality of personal and family life in long-term recovery. Removing such obstacles (including social stigma), expanding recovery space in local communities, and assuring sustained recovery support are major goals of the recovery advocacy movement. The above letter from Shiv Sharma is testimony of how much work remains to be done.

Content originally published by Bill White in the White Papers

You Get Our Exclusive Weekly Top 5 Newsletters in your mailbox and 2 FREE Books!