by Recovery Newsdesk 3 years ago2 years ago
28538views

You may never have heard of Yaba, but it is a powerful and addictive drug often causing devastating effects to its users. A combination of methamphetamine and caffeine, Yaba is known as the “Madness Drug.” Most Yaba is produced in Myanmar, but among drugs in Thailand, Yaba has the biggest distribution. Yaba is mainly found in Southeast Asia, and it has also found its way to the U.S. It’s hard to know how widespread Yaba use is, because Yaba is not distinguished from other forms of methamphetamine.  Yaba has emerged as a drug of abuse in Asian communities in the United States.

Bangladesh is the latest country in Asia to report a surge in use of a methamphetamine pill known as Yaba, with research suggesting that criminal syndicates in Burma are targeting users in the country.

Yaba is the Thai word for “crazy medicine.” It is a tablet form of methamphetamine, a powerful central nervous system stimulant. These synthetically produced pills contain 25 to 35 mg of methamphetamine and 45 to 65 mg of caffeine. Tablets not only come with various logos and in a variety of colors but can also made into nontraditional shapes such as hearts. It tastes like candy and smells like chocolate, leading young people to think it is not a dangerous drug. 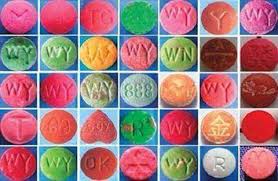 Yaba can be swallowed or injected

When swallowed in pill form, the duration of the drug’s effect averages between 8 to 16 hours, as compared to 1 to 3 hours when smoked. The intensity is considerably reduced when swallowed. The peak of the drug’s effect is followed by a comedown period lasting 6 to 10 hours, during which the user may have difficulty sleeping or eating. Many users report that it takes them up to 24 hours after consumption to be able to fall asleep.

According to the National Drug Intelligence Center: “Although most users administer yaba orally, those who inject the drug expose themselves to additional risks, including contracting HIV (human immunodeficiency virus), hepatitis B and C, and other blood-borne viruses.”

In the U.S. methamphetamine is a Schedule II substance under the Controlled Substances Act. Schedule II drugs, which include cocaine and PCP, have an increased potential for abuse. Abuse of these drugs may lead to severe psychological or physical dependence.

Signs of Yaba use

Yaba is relatively cheap during the beginning of use; however, as use increases, the yaba addict’s tolerance calls for more of the drug. Therefore, yaba users will suffer financial loss and resort to other ways to fund their habit. Since yaba use may require some tools to get high with, being vigilant of paraphernalia is another indicator of use. Look for items like straws, syringes, and foil. These items may be commonly kept in or near cigarette packs, as smoking can go hand-in-hand with yaba use. Keeping pills in mint containers is also a popular thing to do. Physical signs common to those using any form of amphetamine: loss of appetite and weight, bloodshot eyes, sweating, large veins, lack of sleep, bursts of energy, crashing, etc. Yaba users are known to lose track of time, be anxious and confused, and suffer from erratic emotions.

Methamphetamine in all forms is very dangerous and has a high potential for abuse and dependence. Moderate to chronic use of yaba and other methamphetamines may lead to physical and psychological dependence, and even death9. Abuse is characterized by consuming increasingly higher dosages during a period of 3 to 10 days with no sleep, in an attempt to maintain the initial high. However, no amount of the drug can achieve this effect so users may become frustrated, unpredictable, and violent10. When an individual goes through withdrawal from high doses of yaba, as well as all other forms of methamphetamine, severe depression often results.