There are two parties in the addiction blame game. Those suffering from Substance Use Disorder (SUD) or Alcohol Use Disorder (AUD), and their friends, family, and loved ones. Family and friends can be verbally brutal during periods of active addiction. They want their loved one to stop so badly, they do or say hurtful things trying to effect a positive change. They also may have selective memory and focus on the pain loved ones caused rather than the positive results that recovery had brought.

Those with substance use disorders may remember harsh words and actions for the rest of their lives even if their family members actually supported them, paid for their treatment, and acted in honorable ways beyond what they said. The addiction blame game works both ways because addiction hurts everyone. Addicts often blame their loved ones for their problems. Loved ones blame because recovery isn’t coming fast enough, or they can’t forget. It hurts and doesn’t help.

Learn How To Stop Playing The Blame Game

Here Are 2 True-Life Examples Of Stopping The Blame Game

Jennie was a heroin addict who drained her mother, Alice’s, resources over a decade and eventually stole her laptop and jewelry. Jennie has forgotten her own actions and the hurt they caused because it was addiction and not her. Unfortunately, she continues to verbally strike out at her mother of not loving or caring for her enough while she was using. Jennie specifically won’t forgive her mother for not traveling 100 miles every week to bring her soft toilet paper when she was in jail on drug charges. Alice feels guilty enough about Jennie’s drug journey, and Jennie’s anger about the past keeps her nervous and worried about what she should be doing better now.

Alice goes to Al-Anon to learn not to engage with Alice when she complains. While Jennie is not in emotional recovery, Alice is taking care of herself. 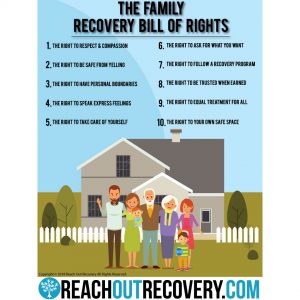 Why These  8 Traits of Family Function Make Happy Families

Dan is a well-meaning father who constantly reminded his son, Peter, a recovering addict of 13 years, that he has not fulfilled his potential and could be doing so much better in life. This constant rebuke was like opening old wounds for Dan every time they talked or met. In fact, Peter started a small business, is busy and engaged in his community, and leads a successful life that he enjoys to the fullest.

Dan saw a therapist to ease the tension in their relationship. Dan began to understand that his expectations for his son were the problem. Peter is happy and successful on his own terms even if he isn’t doing what his father planned for him. When Dan stopped talking about his own feelings and accepted reality, they became close friends.

The blame game whatever form it takes is juicy and gets you going. But engaging in it is keeps the conflict, tension and unhappiness going. If you don’t blame others or react when others blame you. There’s nothing to fight about. Game Over.

Quiz: When You’re Triggered What Do You Do?

You’re Dan’s girlfriend and see Dan smoking at a party when he promised not to smoke. You remember that he is a recovering addict and panic thinking crack is next:

You’re Gretchen’s mother. You see Gretchen eying your purse. You’ve just been to the bank and have some cash for errands. Gretchen used to steal this cash for drugs years ago.  Gretchen knows you and that you are about to say something. Do you:

You’re Adam’s sister. You hear that Adam is telling everyone that you are to blame for much of what he suffered while an addict. You have that heart-stopping desire to strike back with stories about what he did to you. Do you:

If you picked 3, you know how to stop the blame game. If you picked some other answers, you’re still playing the game, and probably still getting into some fights.

In the blame game there are no winners and everyone ends up hurt. Finding ways to stop playing is the best game of all.

I love love love all of your articles. They have helped me so much with my son, daughters and myself with issues about addictions, abuse and a lot of of issues. I love reading them they are just the right length. I am busy amd do not have a lot of time to read. Thank you amd keep them coming. I am looking for one article that I read on here I think the title was about when your child will not accept your love.

Leslie Glass became a recovery advocate and co-founder of Reach Out Recovery in 2011, encouraged by her daughter Lindsey who had struggled with substances as a teen and young adult. Learning how to manage the family disease of addiction with no roadmap to follow inspired the mother and daughter to create Reach Out Recovery's website to help others experiencing the same life-threatening problems. Together they produced the the 2016 ASAM Media Award winning documentary, The Secret World of Recovery, and the teen prevention documentary, The Silent Majority, distributed by American Public Television. In her career, Leslie has worked in advertising, publishing, and magazines as a writer of both fiction and non fiction. She is the author of 9 bestselling crime novels, featuring NYPD Dt.Sgt. April Woo. Leslie has has served as a Public Member of the Middle States Commission of Higher Education and as a Trustee of the New York City Police Foundation. For from 1990 to 2017, Leslie was the Trustee of the Leslie Glass Foundation. Leslie is a proud member of Rotary International.